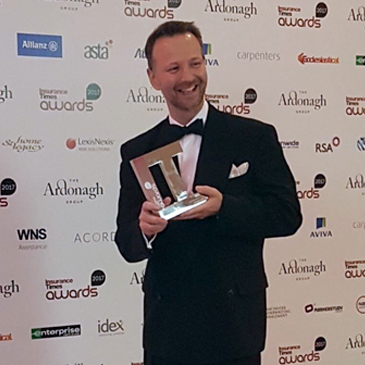 The Insurance Times Awards took place at the InterContinental London. Hosted by Kevin Bridges, which was enjoyed by over 1100 guests, the highly established black tie event was not to be missed – especially when you are a finalist twice over!

With Vetsure’s in-house claims team having just celebrated their first birthday and the new e-claims system launched in April 2017. They were up for ‘Insurer Claims Initiative of the Year’ and ‘Insurer Innovation of the Year’.

Ashley Gray, Managing Director at Vetsure said “We have come so far as a company in such a short space of time, and it is all thanks to the hard work and unquestionable commitment of the Vetsure team – it’s a complete joy to work alongside such a talented group of people. Reading through our 2017 achievements is incredible – we have had so much to celebrate and this is the icing on the cake! ”

"FIVP provides a voice for independent veterinary practices, as well as promoting and supporting the great services they provide."